Characteristics and consequences of the closed curve of type time

Normally the causality implies that each event in spacetime must be produced by a cause, taking how frame of reference the rest. This is a principle based on determinism, according to general relativity, which States that from the knowledge of the universe on a surface of Cauchy type space, it is possible to determine any later state of spacetime. 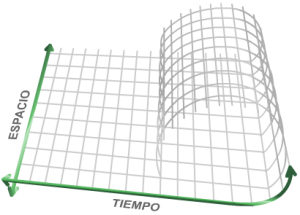 However, in one closed curve of type timethe law of causality is not met because an event can be simultaneous with its cause, so that the event would become its own cause.

We have a special category of Physics books in our geeks gifts online shop,

so you can understand in depth the nature of the Time travel.

This website uses cookies to improve your experience while you navigate through the website. Out of these, the cookies that are categorized as necessary are stored on your browser as they are essential for the working of basic functionalities of the website. We also use third-party cookies that help us analyze and understand how you use this website. These cookies will be stored in your browser only with your consent. You also have the option to opt-out of these cookies. But opting out of some of these cookies may affect your browsing experience.
Necessary Siempre activado
Necessary cookies are absolutely essential for the website to function properly. This category only includes cookies that ensures basic functionalities and security features of the website. These cookies do not store any personal information.
Non-necessary
Any cookies that may not be particularly necessary for the website to function and is used specifically to collect user personal data via analytics, ads, other embedded contents are termed as non-necessary cookies. It is mandatory to procure user consent prior to running these cookies on your website.
GUARDAR Y ACEPTAR